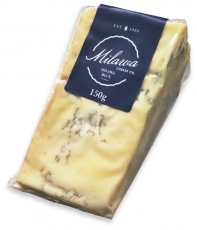 Four ingredients: Milk, Salt, Culture and Rennet.lineline This is the hand cut, 150 gm format of the larger format Milawa Blue. Hand cut for the wheel, the wedges are sold as set weight.

Milawa Blue is a seasonal cheese with a mild flavour enhanced by the restrained growth of delicate green/white mould. This is a handmade cheese with a natural rind, Milawa do not use any stabilizers in their cheese making.

This cheese has plenty of character and has won several Australian Cheese Awards. Originally styled on Italian Gorgonzola, it is a mild creamy blue, and features prominently as one of Australia's finest locally produced cheese.

This is a quality Australian cheese which is developed from optimum fresh product thus producing a exceptional specialty cheese.