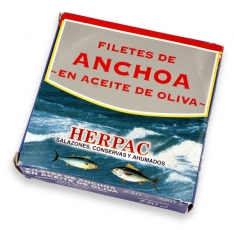 Spanish Anchovies have long been held in high esteem. Fat plump juicy flesh, perfect seasoning to retain the goodness, nutrition and depth of flavour. The reason they taste so good is largely due to the particular species - Engraulis Enchrasicolus - and the stringent quality controls and grading. The size of the fishis important, the health of the fish, the areas fished, the season, local weather - are all important factors to be evaluated. Then the anchovies must be aged correctly, packed by hand, stored carefully, and graded by colour, firmness and taste. While the process of salting fish to preserve them has been practiced for thousands of years, preserving them in olive oil is a more recent invention. In the 1800's, a man named Vella established a preserved anchovy business on the northern Atlantic coast of Spain (where fishing has long been a major industry). He first skinned and filleted them, then salted them according to the traditional process, and packaged them in small tins. He tried preserving them in pork fat, butter and eventually olive oil, the form in which they are today most commonly found.