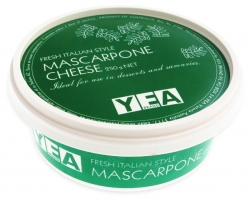 Mascarpone is a triple-creme cheese made from fresh cream by treatment with tartaric acid and removal of the whey, without pressing or aging.

Mascarpone is used in various dishes of Lombardy, Italy, where it is a specialty. It is milky-white in color and is easily spread. When fresh, it smells like milk and cream, and often is used instead of butter to thicken and enrich risotti. It is also the main ingredient of Tiramisu.

The cheese apparently originated in the area between Lodi and Abbiategrasso, Italy, south-west of Milan, probably in the late-16th or early-17th century. The name is said to come from "m s que bueno" (Spanish for "better than good"), or from "mascarpa," a milk product made from the whey of stracchino or aged cheese or it may come from "mascarpia," the local dialect for ricotta; however, it is not made by the same process, nor is mascarpone made from whey as ricotta is.

Mascarpone is often mispronounced as if it were spelled "marscapone," and also often misspelled that way. Yea Brand Dairy Mascarpone is produced at Yea in Victoria. Yea, pronounced "Yay" is situated at the northern gateway to the Yarra Valley, just north of Melbourne.