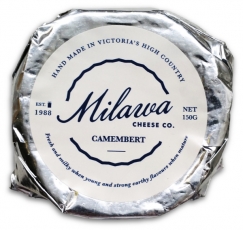 13% increase from 3/6 across all Milawa Range.kerning3fs16
NEW look packaging and New size.
The Milawa Cheese Company is a small highly regarded speciality cheese factory located in North East Victoria's famed wine region of Australia. All their cheeses are hand-made at the historic Milawa Butter Factory, using traditional methods without preservatives and non-animal rennet.

The local micro flora in the factory means the cheese produced here has a unique, regional flavour. At its best, Milawa Camembert is as good as a raw milk camembert from Normandy France. In fact this is the only individual size round Camembert we stock from an Australian producer. These 140 - 150 gm portion size are smaller than the traditional 250gram rounds from France but they do not dismiss any flavour. Given the smaller size they will mature faster than the larger rounds. Importantly, Milawa Cheese does not use any stabilisers in making their Camembert. Stabilisers make the cheese more "shelf stable" for supermarkets but give a more rubbery taste. Avoiding stabilisers mean you get a better flavoured cheese but a shorter shelf life of not much more than about 14 days.

This cheese has a velvety white mould on the exterior which does break down showing reddish brown tinges about the edges. It sometimes has the earthy aroma of fresh mushrooms. As the cheese approaches its best before date, the centre becomes creamy and soft and almost liquid, as toasty, yeasty flavours develop. Milawa also make a Milawa Goats Camembert.

- Eating Recommendations: Try baking in the oven for a delicious camembert fondue, and nicely paired with bread, lavosh crackers and fruit for an intercourse before or after a main meal. It is an added highlight to sauces, tarts, puddings, souffl'e9s, pasta and toasted sandwiches