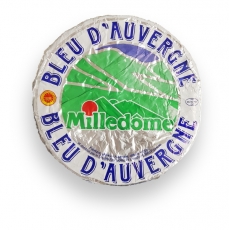 According the the history books, Bleu d' Auvergne was discovered around the 1850's. As far as French Cheese goes, 1850's means that Bleu D' Auvergne is a recent cheese.

Originally, the cheese was born of a series of hits and misses by a cheesemaker named Antione Roussel in the Auvergne region of south central France. The blue veins are a cultured mould originating from Rye bread (Penicillium glaucum) and it was Roussel that developed the now common method of needling the curd.

These days the needling process is carried out mechanically. Bleu d' Auvergne is controlled by an "Appellation d' Origine Controlee" issued in 1975 which assures it's authenticity to the original cheese produced only in the region. The flavour is full, strong and pungent but with less salt than that of Roqueforte. The pate is buttery and moist. lineline This product is available using the OTW (order to week), high frequency, low volume indent system. This ordering method gives retailers and foodservice professionals access to premium cheese brands from France with optimal shelf life. The sysytem also allows the operator to order in their own, personalise range of products. Contact us or email shop@kirkfood.com.au to become an OTW stockist.