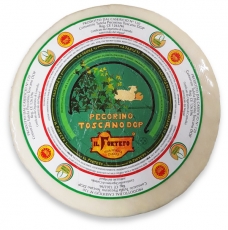 If you have ever tasted Pecorino Toscano from Italy, you will know there is a world of difference between the widely used Pecorino Romano, and the delicate but complex taste of real Tuscan Pecorino. We are particularly impressed with its founder, Stefano Sarti who manages the farm. Stefano is a truly unique man who is dedicated not only to producing outstanding quality cheese, but also to maintaining traditional aspects of Tuscan cuisine (he also produces beef from the rare white breed of Chianina cattle for the restaurants of Italy).

The name "Pecorino" is a recent adaptation. Until the end of the Second World War, every area in Tuscany had its own "Cacio" with a different name, even though the cheese making techniques used were very similar.

The soft version matures for at least 20 days while semi-hard Pecorino remains in the cellar for usually four months at 8-10'f8C with a humidity of 80-90%. Pecorino Toscano DOP is made all over the Tuscan region including some areas of Umbria and Lazio.

"Pecorino Toscano" varies in subtle ways amongst different producers. Depending on where the milk originates the cheese will vary according to the pastures ewe's graze in, the breed of sheep used, and the cheese maker's techniques. Pecorino Toscano Fresco is a fresh pecorino 30 days old.

This product is a random weight product and therefore, the weight and the amount will only be available once the goods are shipped.