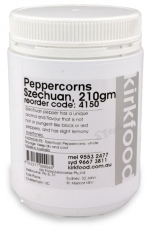 Szechuan pepper has a unique aroma and flavour that is not hot or pungent like black or red peppers, and has slight lemony overtones, but with a kind of tingly numbness (caused by its 3% of hydroxy-alpha-sanshool) that sets the stage for these hot spices. Recipes often suggest lightly toasting and then crushing the tiny seedpods before adding them to food. It is generally added at the last moment. Star anise and ginger are often used with it and it figures prominently in spicy Szechuan cuisine. It is considered to go well with fish, duck and chicken dishes.