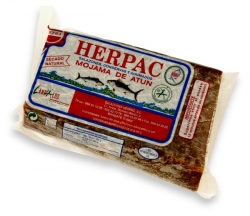 Within the realm of well-known Spanish tapas lies one of the country's hidden treasures, mojama. The history of this salt-cured tuna dates back at least as far as the Arab Conquest, but if one were to compare the mojama of today with its predecessors, they would find little variation. Recent generations have found no reason to mess with what nature has so generously provided. Mojama is most commonly found in the southern provinces of Huelva, C diz, and Almeria, where the hot temperatures mix with a dry, windy climate to create the ideal circumstances for its production. After being meticulously cleaned, loins of fresh tuna are stacked and smothered in sea salts for two days. After being washed for up to twelve hours in bins with fresh running water, the tuna is hung out to dry in the sun, slowly aging for an average minimum of 21 days. When this process is complete, the tuna will have lost half of its weight. The salt and coastal breezes help to turn its flesh luscious, firm, and deep-reddish brown in color. While mojama is still a largely undiscovered delicacy outside of Spain, it has been recognized by specialty stores worldwide for years and is slowly entering more mainstream markets as the demand increases. In Spain, Mojama is most often served in thin, translucent slices, drenched in only the best extra-virgin olive oil, with a glass of your favorite white wine. Elsewhere it has been seen finely grated over a plate of lightly oiled spaghetti, with a chopping of parsley and a glass of red wine. However you decide to use it, the culinary possibilities of the subtle but unique flavour of mojama are endless. Megan Schmidt