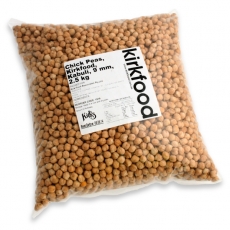 Long cultivated as a pulse crop in the Mediterranean, the Middle East and on the Indian sub-continent, chickpeas are a traditional and sought-after human food grain. Desi chickpeas are commonly split or processed into dhal, while Kabuli chickpeas are consumed whole or ground into a paste called hommus. Today, some 7 million tonnes of chickpeas are cultivated annually in 45 different countries, making them one of most widely grown grain legumes in world. The Indian subcontinent accounts for about 75% of world production, with the remainder coming from eastern Africa, the Mediterranean, western Asia, Australia, southern Europe, and North and South America. chickpea's high nutritional value and its reputation as an aphrodisiac. The species name arietinum is derived from the Latin word `aries,' meaning `ram,' and refers to the ram's-head shape of the seed. Chickpeas were held in such high regard in ancient Rome that the statesman Cicero took his name from this legume.They can be eaten fresh, dried, boiled or roasted. The cooked seeds are used in soups and salads or ground into flour. Chickpeas are relatively low in anti-nutritional factors and are one of the most easily digested beans. Their high fibre content decreases serum glucose and cholesterol, potentially reducing the risk of heart disease and lowering the insulin requirement for diabetics. They contain from 19-25% protein. The protein is low in the essential amino acid methionine, however, so chickpeas should be combined with other protein sources for optimal nutrition. Chickpeas are also a good source of vitamin C, calcium, phosphorus and iron.